How to Address Wedding Invitations

Wedding invitation address etiquette is overwhelming, but it is extremely important to get right. In fact, the envelope addressing format you use tells your guests so many things and makes them feel more welcome. That’s the whole point of etiquette, right?

GRAB YOUR FREE ADDRESSING TEMPLATE BELOW

Unmarried couples living together receive one invitation with both of their names. The word “and” implies marriage. So, they’re listed on separate lines with the woman listed first.

If you don’t know who your guest is bringing as their plus one, use…

Make a note that “guest” is lowercase because it’s not a proper noun.

Traditionally, a man’s first and last name are never separated. Always list couples in the order of highest “ranking” if either of them are doctors, judges, military, etc.

Traditional form for a married couple…

When the husband is the second of his name…

There is a comma and “junior” is written in lowercase letters. Don’t abbreviate to “Jr.”

If the husband is a doctor…

If they have a PhD, use the abbreviated “Dr.” If they are a medical doctor, spell out the word “Doctor”. The same goes for the two examples below.

If the wife is a doctor…

The spouse with the higher ranking title is always listed first on an envelope.

If both are doctors… 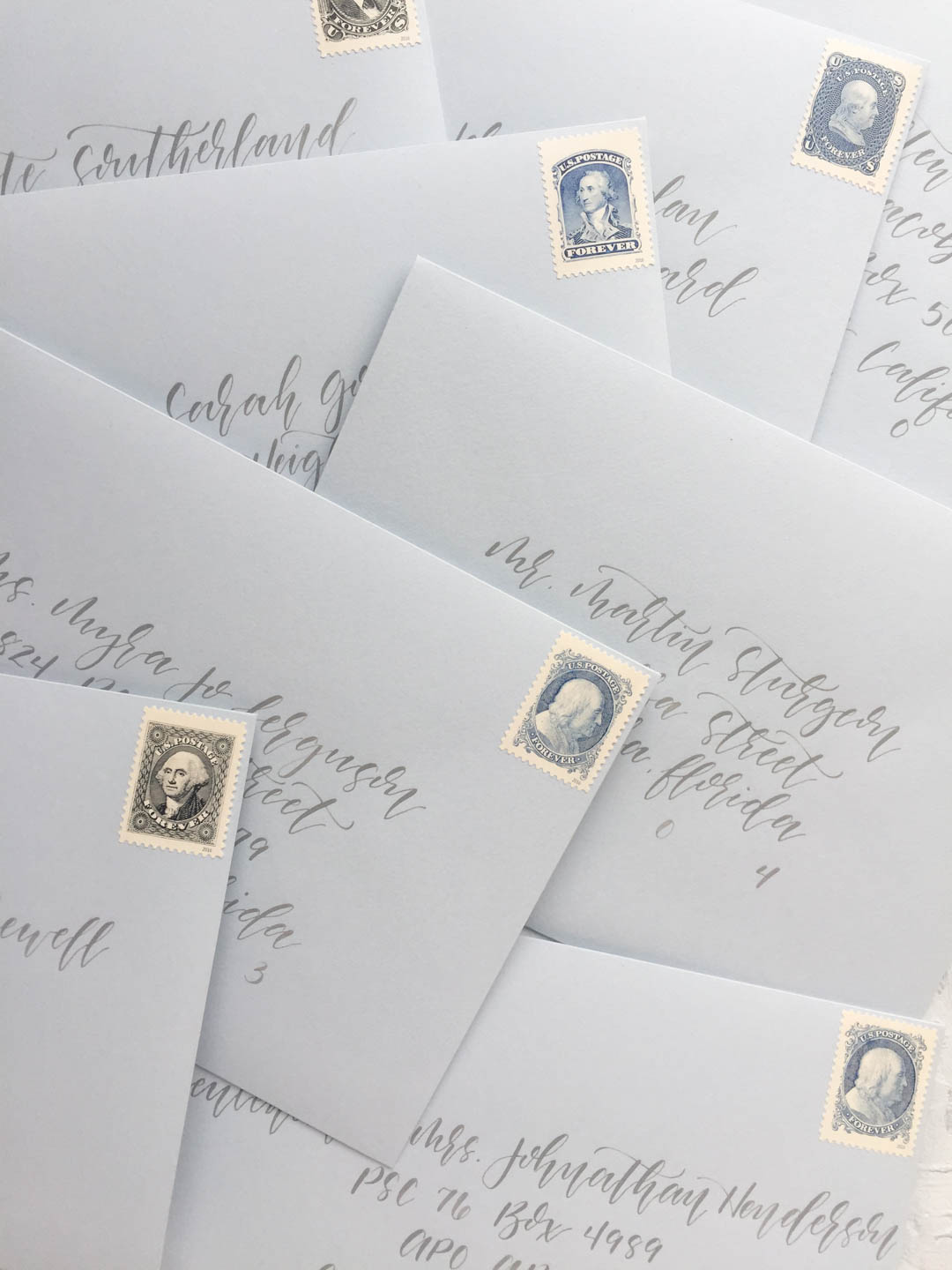 You’ve probably wondered, “What’s the point of two envelopes? Is that really necessary?” More and more couples opt to eliminate the second envelope. However, double envelopes are more traditional and do actually serve a purpose.

Outer envelopes keep the inner from getting dirty. As a result, your guests are much more likely to hold onto the inner envelope instead of throwing it away.

An outer envelope also allows you to put an envelope liner on the inner envelope. Consequently, this keeps the liner from ripping when guests open it.

Also, double envelopes make it very clear who is invited because you can state them individually by name on the inner envelope. This clears up any confusion about adults-only weddings. 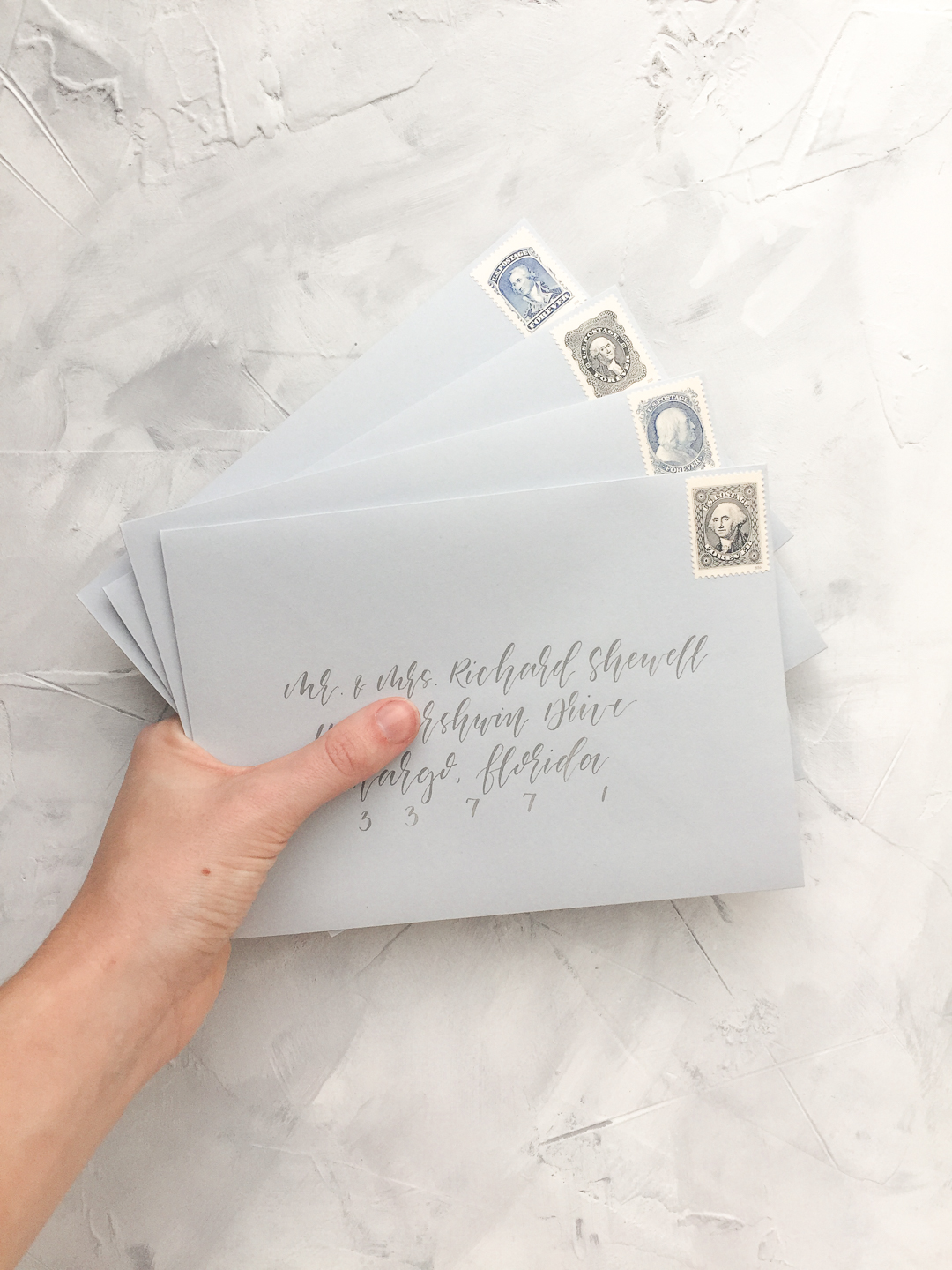 If you choose to use an inner envelope, you typically use titles and last names only. List children by first name on a separate line. You may also drop titles and use more personal names for your friends and family. Here are a few examples:

A married couple with children invited…

A single person with an unknown plus one…

Nicknames used instead of proper names…

Technically, families with children over the age of 18 should receive their own invitation.

In general, do not include any abbreviations in the address other than titles. For example, spell out words like “Street” or “Apartment”. Additionally, do not abbreviate states either.

“Miss” is typically only used for girls under the age of 18. Otherwise, use “Ms.” 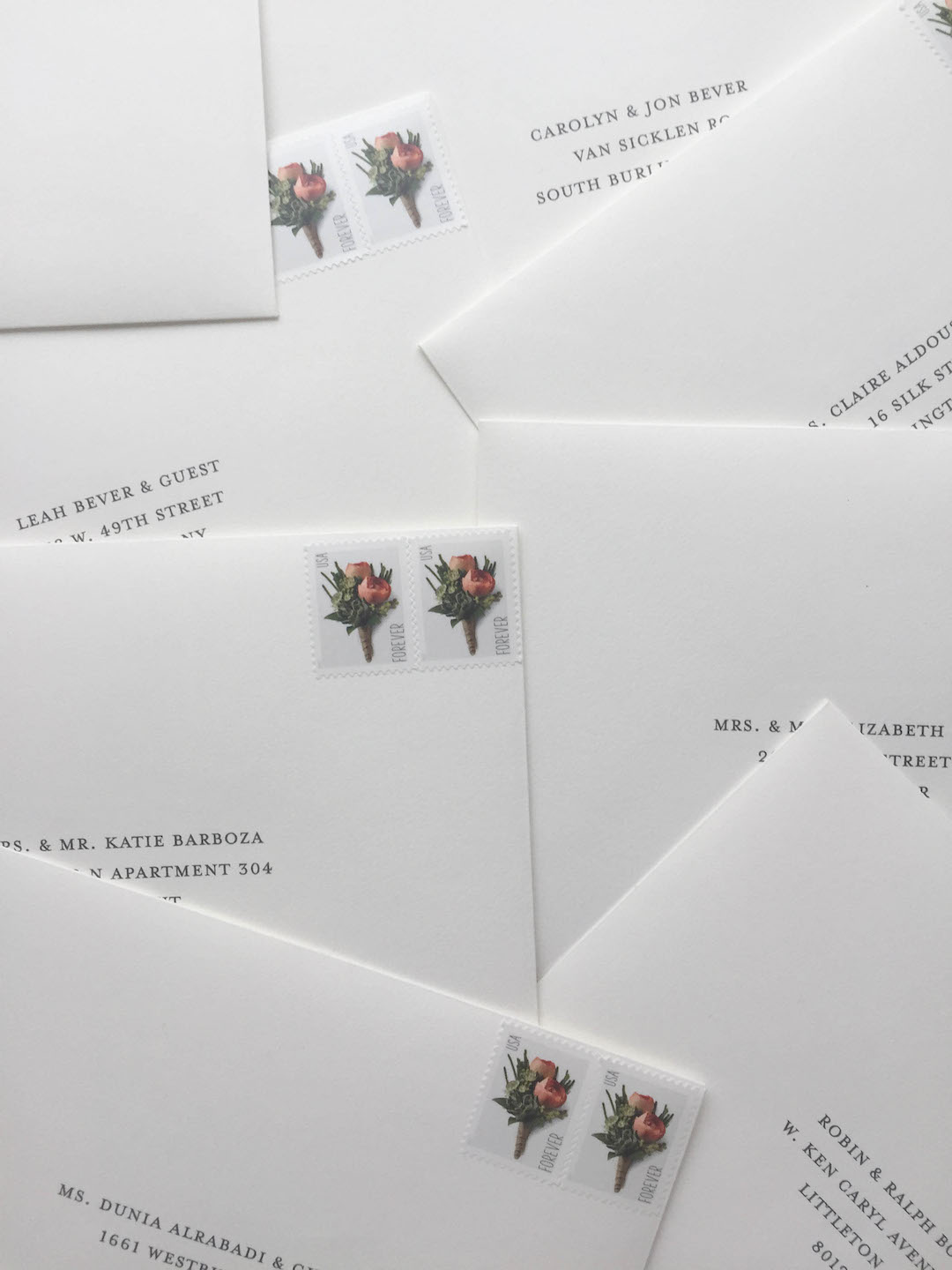 I know it seems daunting to address wedding invitations. However, it isn’t actually that bad. Go through your list, and do the proper formatting for the easy ones first. Then, go back and format the more complicated ones. Just take it case by case, and ask your stationer if any of them are confusing! 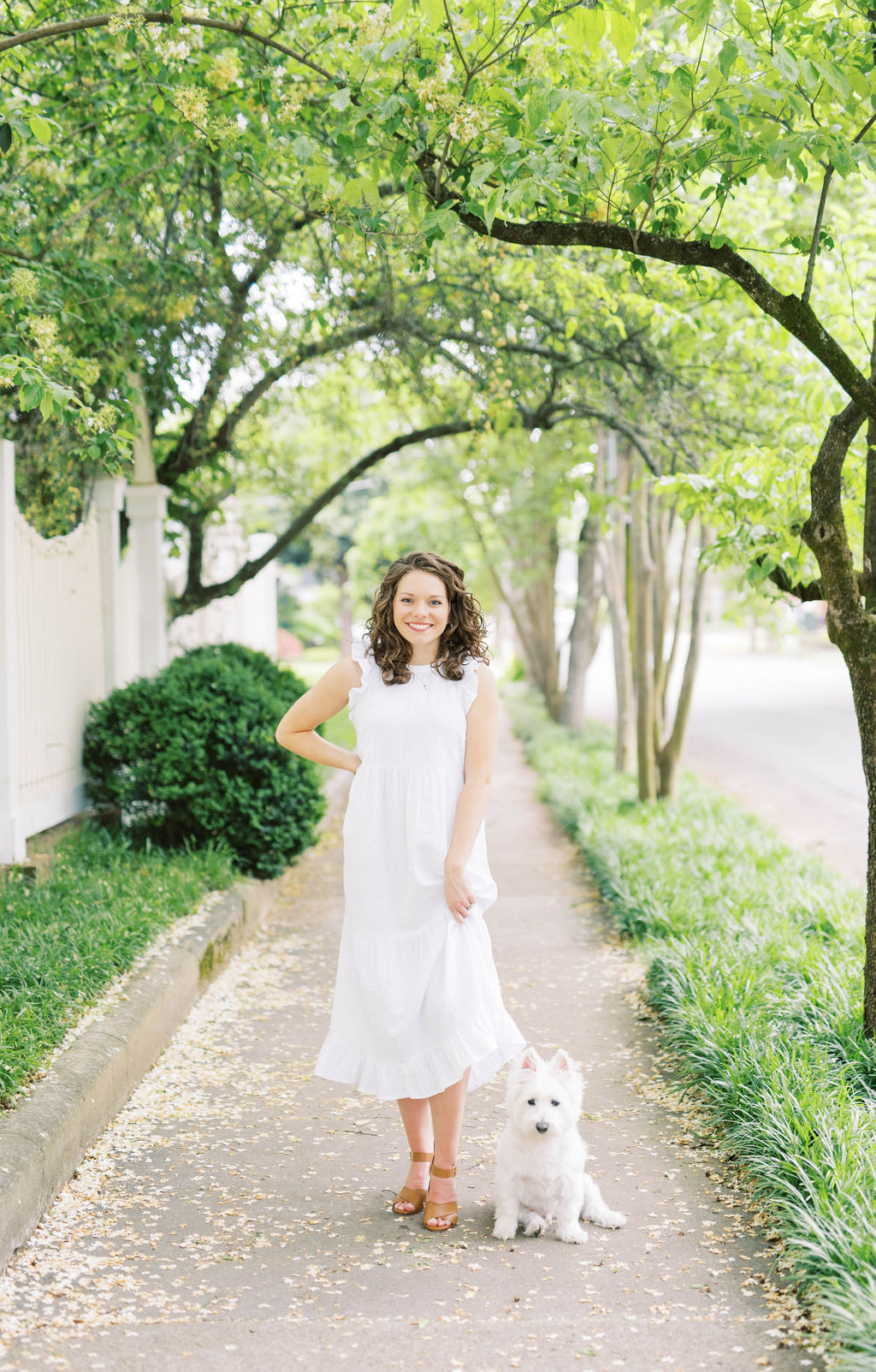 Hello! I’m Gracie, and this is where I share my thoughts about weddings, design, paper, and so much more. So, grab a cup of coffee and start reading. Get to know me here.

Get your FREE Wedding Invitation Checklist! 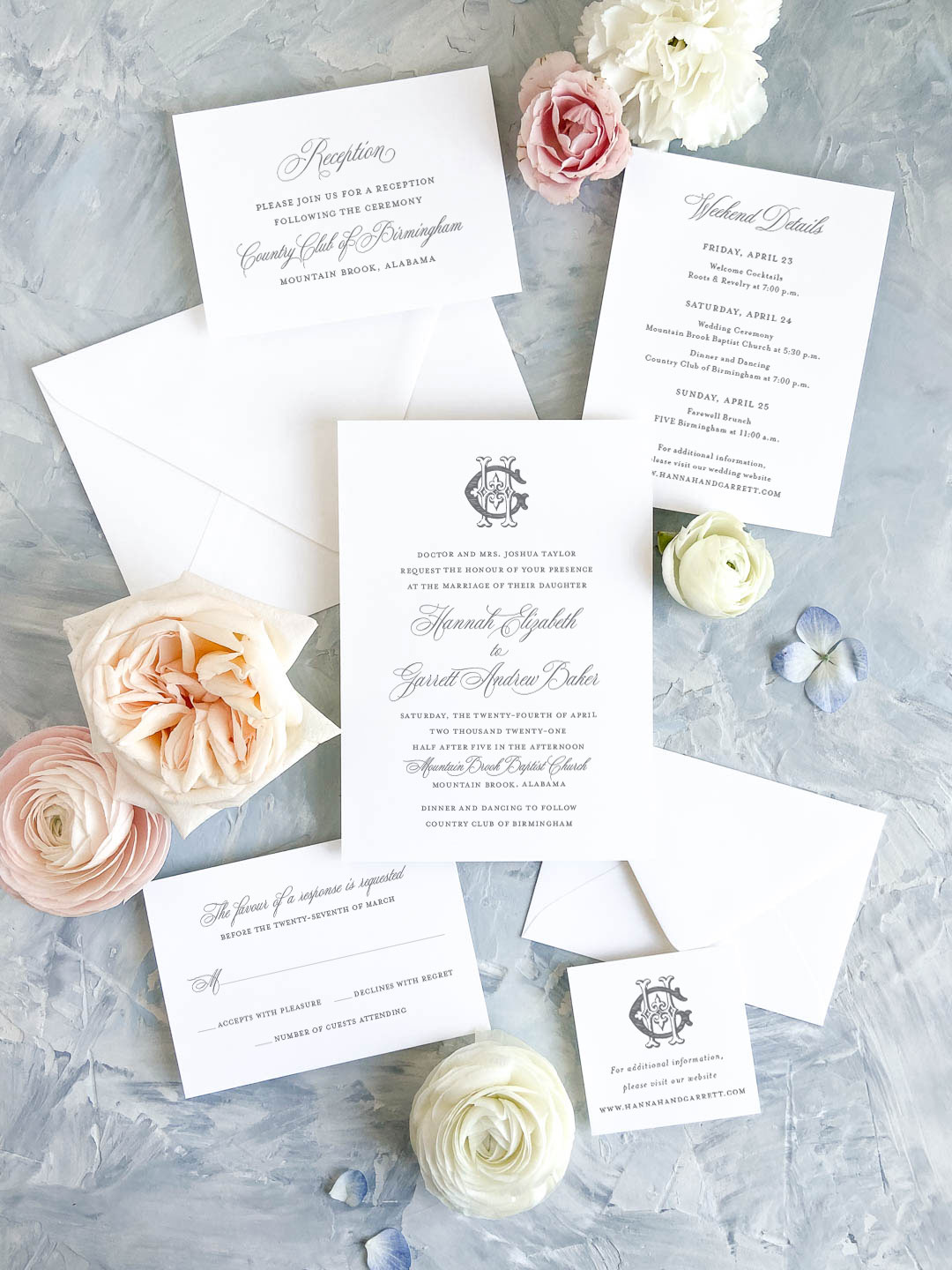 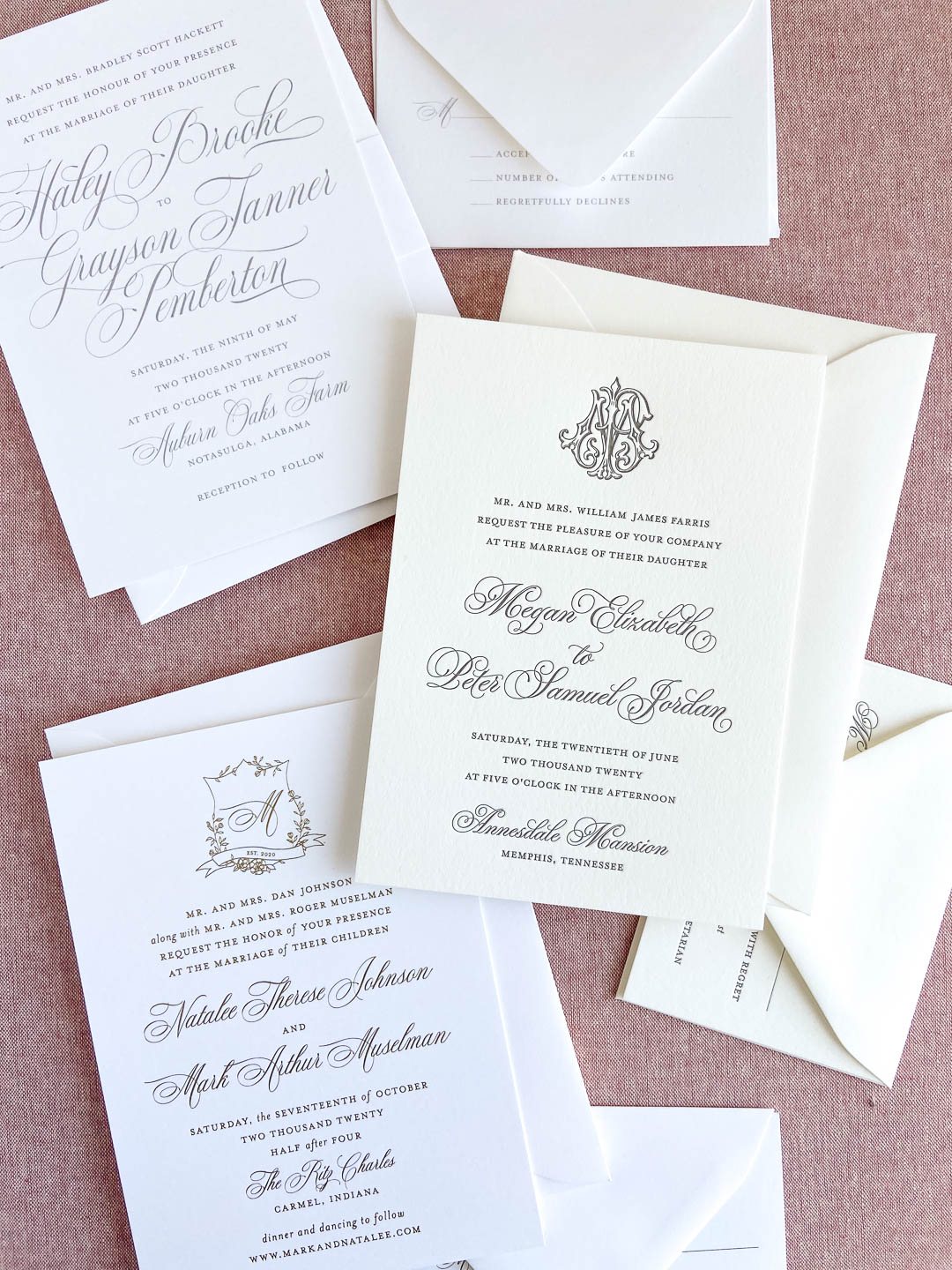 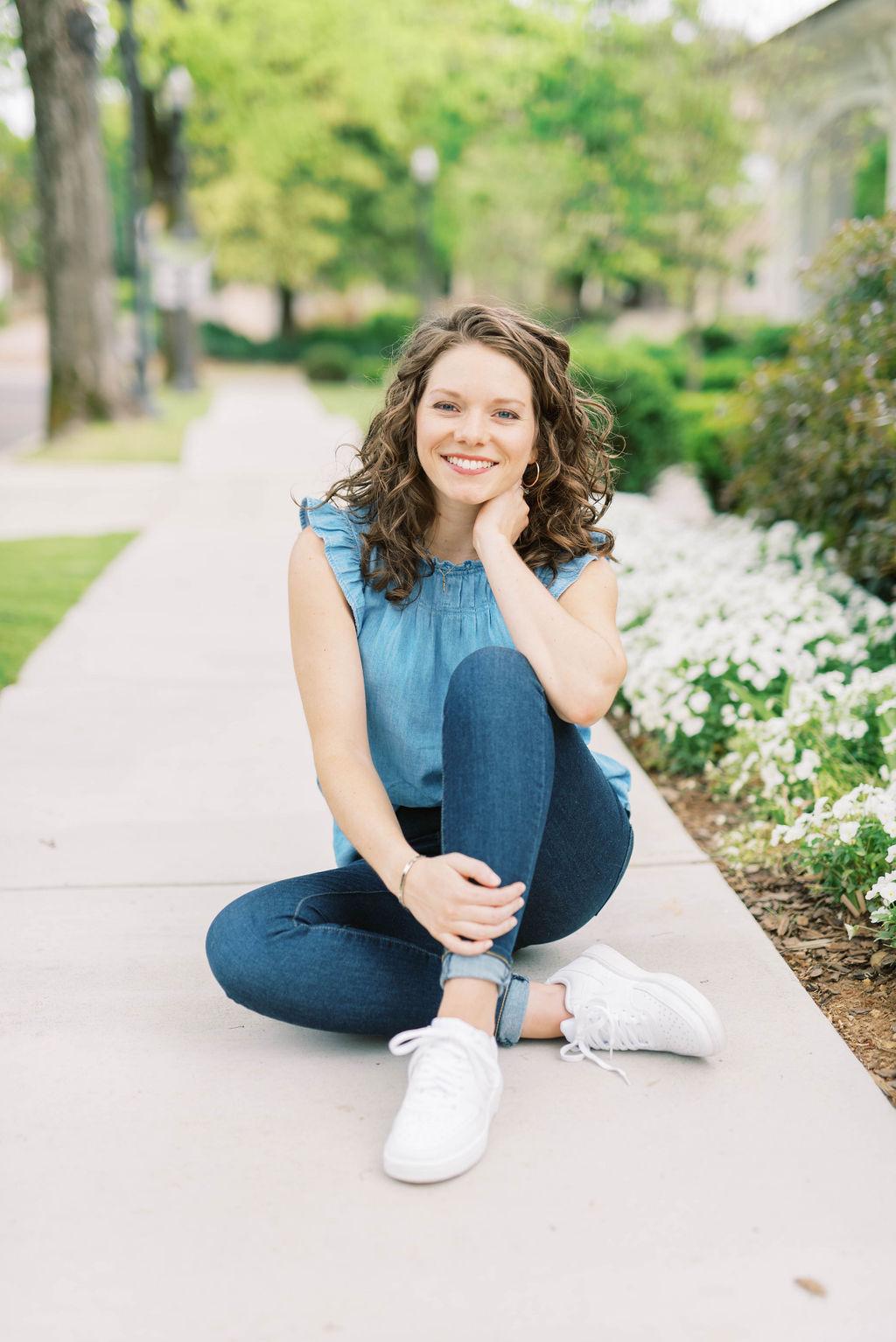 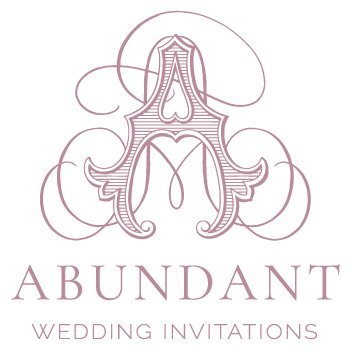 What a year! 2021 came with its challenges, but wh

Don’t let thank you cards be an afterthought! We

The Leah Suite is as classic as they come. She loo

We are experiencing delays for products such as cocktail napkins, cups, stir sticks, koozies, and matchboxes.
Please allow for additional production time on these items. Dismiss